Letter41 is a brand that believes in the details in all aspects of life. Treating all of your life as an art. Each part being done with deliberate care. Letter41 is a men's lifestyle brand that wants men to question more. Be willing to be vulnerable. Explore beautiful ideas. Slow down. To be willing to get into hard conversations with other men and uncover more about themselves through the process.

Creating a lifestyle brand based around minimalism. The idea of masculine and high design blended together. Caring about the details but keeping it straight forward. A brand that add a sense of mystery and depth.

Using design based on foundation in history. Influenced by the philosophers and thinkers of the ancient civilizations. Keeping the design honest and restrained. Straight to the message. Minimal yet with depth and intrigue. Creating a series of both print and digital ideas. Invitations and cards that made those invited want to come and learn more about themselves.

A successful dinner with men from all walks of life. Leading to new friendships. Better questions asked of themselves. An exploration of the self. Asking for Letter41 to continue expanding its ideas. Inspiring more to care about those small details. Wanting to understand the idea of high design.

Letter41 is a lifestyle brand created by two friends. Their friendship's foundation based on seeking real truth. They pushed each other to share more about themselves. Strive for higher ideals. To seek a life well lived. They wanted their entire lifestyle to embody the idea of this truth. Uninterested in the frivolous surface things they wanted to understand a deeper knowledge. Driven by minimalism, philosophy of both east and west, strong aesthetics and high design. Wanting to understand more of what it means to be a man in the modern age.

They exchanged, stories, ideas and perspective. Both in a time of constant growth. They felt there was importance in sharing stories through the channels of self expression. Willing to be vulnerable. Willing to share more than how their day was or showing off.

They believed there was a better way to be a man. A man who was willing to talk with other men. To express his desires, fears and dreams. One who cared about the details. Wasn't ashamed to explore style, design and what true elegance looked like.

Letter41 was born from this idea. Of creating an all encompassing lifestyle. Everything being done with purpose. With deliberate care. Not only one aspect but discovering in all things the attention to detail. The basis of this brand was to host thoughtful dinners.

Keeping it small they wanted to invite men they admired. From all walks of life. They wanted it to be a roundtable discussion filled with different perspectives. These were the kind of men who believed in the strength of character rather than a title or the size of a bank account.

Their plan being to expand from there to exploring the idea of lifestyle brand that encompasses all aspects of life. Seeking those details in all things. Embedding high design in all parts of living life.

My task was to bring out the idea of minimalism and elevated design. Simplicity yet strong expression. In a sense their ideal man. Someone who was straight forward and honest. Willing to be vulnerable and caring about the details. Speaking his truth quietly rather than loudly. Instead of owning a lot of things, owning only the right things.

I rooted a lot of Letter41's foundation in design history. Using the power of the Golden Ratio that has been around for ages. Discovering fonts that held a sense of history to them. Their assets all having a sense of the minimal but striving for high ideals.

I chose to design all assets with the idea of a striped down design. Vulnerability expressed through design. Taking off the armor and flash. Elevated yet restrained. Seeking a greater truth.

My idea for Letter41's logo was utilizing the cool shape L41 could make. Putting those letters together one could almost make a rectangle. It was minimal and geometric. Using only straight lines and few diagonals to create the shape. This lead to an exploration of many layouts of where to put the L, 4 and 1. 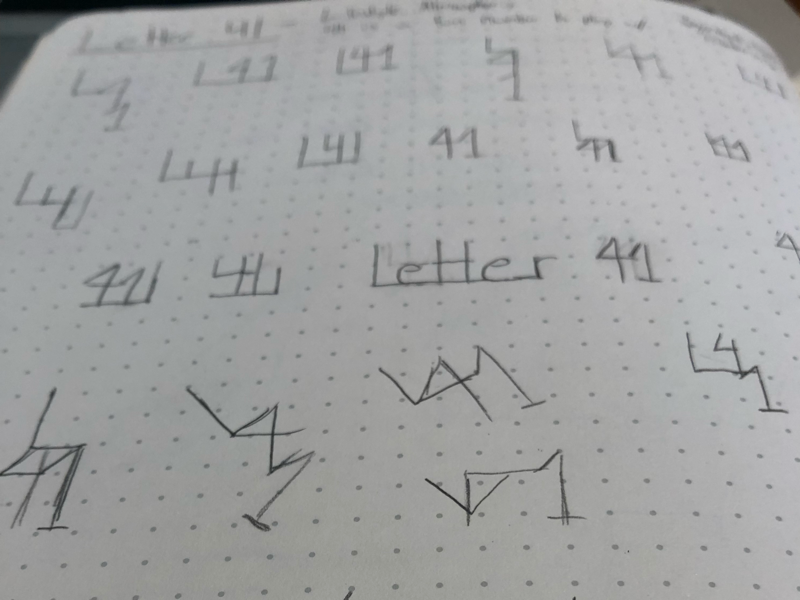 I came back to L41 sitting on solid ground. Creating almost an awning with the 4 and 1. It had an architectural representation. I decided to use the oldest ratio discovered for design and art. The Golden Ratio. Having a similar root to the history Letter41 was after. As well as L41 creating that idea of a rectangle. I used the size of the golden rectangle to determine spacing of the L and create the same diagonal for the 4 and 1. The logo almost giving a sense of elevating to the skies.

The colors were to be muted and neutral. This wasn't about flash. It was about expressing things in a straightforward manner. A sense of the masculine in the brand. Straight to the point in the invitation. In the cards. Even in the potential of a website. Keeping it to minimal neutral colors and using gold foil for all printed material. Keeping it restrained and quiet.

When it came to font choice I instantly knew to use Trajan. A typeface based off of the Roman Imperial Letterform Chiseled into stone. A time of great ancient history. Of philosophers. Beautiful art. Elevated and thoughtful living. Trajan represented Letter41 as a typeface.

I chose Gill Sans to pair with Trajan. As Gill Sans is also influenced heavily by Roman capitals and traditional old style serifs. Gill Sans is so much different than Futura and other Sans-Serif fonts that came about in the same time. It has a rich history of being an older font, coming out right when Geometric typography was becoming a new thing.

The two fonts would blend well together in creating readable text and beautiful headlines. Letter41 in Gill Sans gave rise to the same minimal and refined shape I was hoping to achieve. It spoke of the elevated design they were after. It represented the logo well.

Since Letter41's initial focus was around an invitational dinner we thought about creating a little packet to send to the invitees. A simple business card that would include the company name along with the dinner information - date, time and location.

This packet would also have a formal invitation. Why one was chosen and the goal of the dinner.

It's easy to get lost in the flourishes when it comes to invites but I decided to continue to keep the restrained look. At the end of the day the logo and the words written were all that needed to be said. Continuing the idea of straight forward design.

I expanded the idea of the Golden Section Ratio to find alignments and size of logo along with the spacing of the text. Hoping to continue creating simple rectangles with the negative space on the back of the business card. 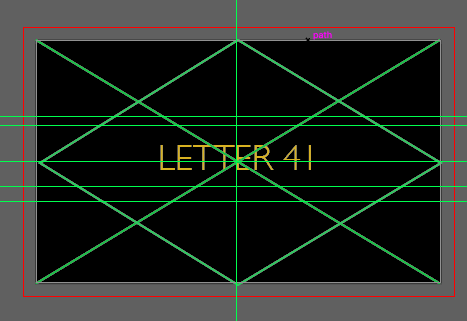 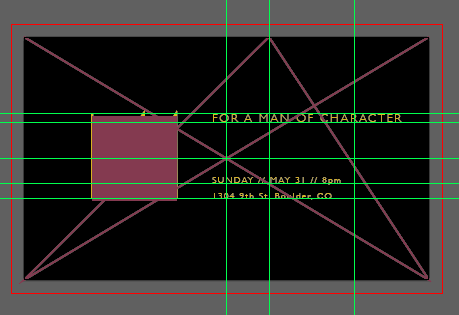 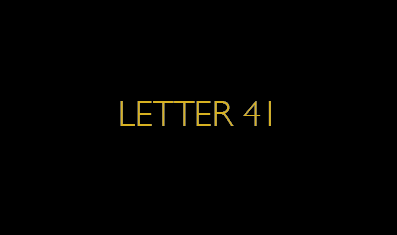 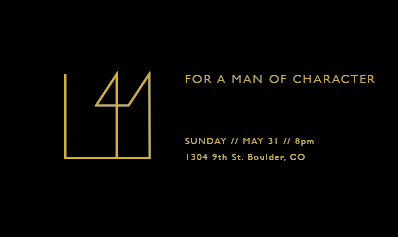 As for the invite it was based off A4 paper so it was easy to fold that down to a smaller root 2 rectangle to use as spacing and placement of text & logo. As you can see it is straight-forward in the explanation and details of the dinner. Our purpose with the card was something easier to carry and use as a reminder as invitations get lost all the time. 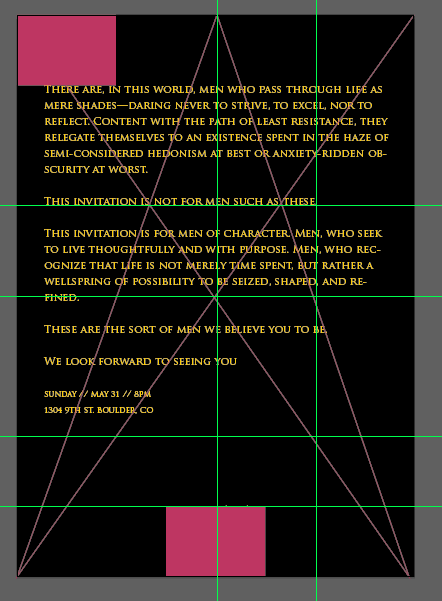 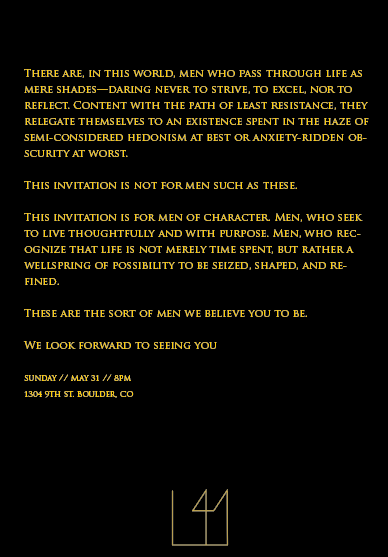 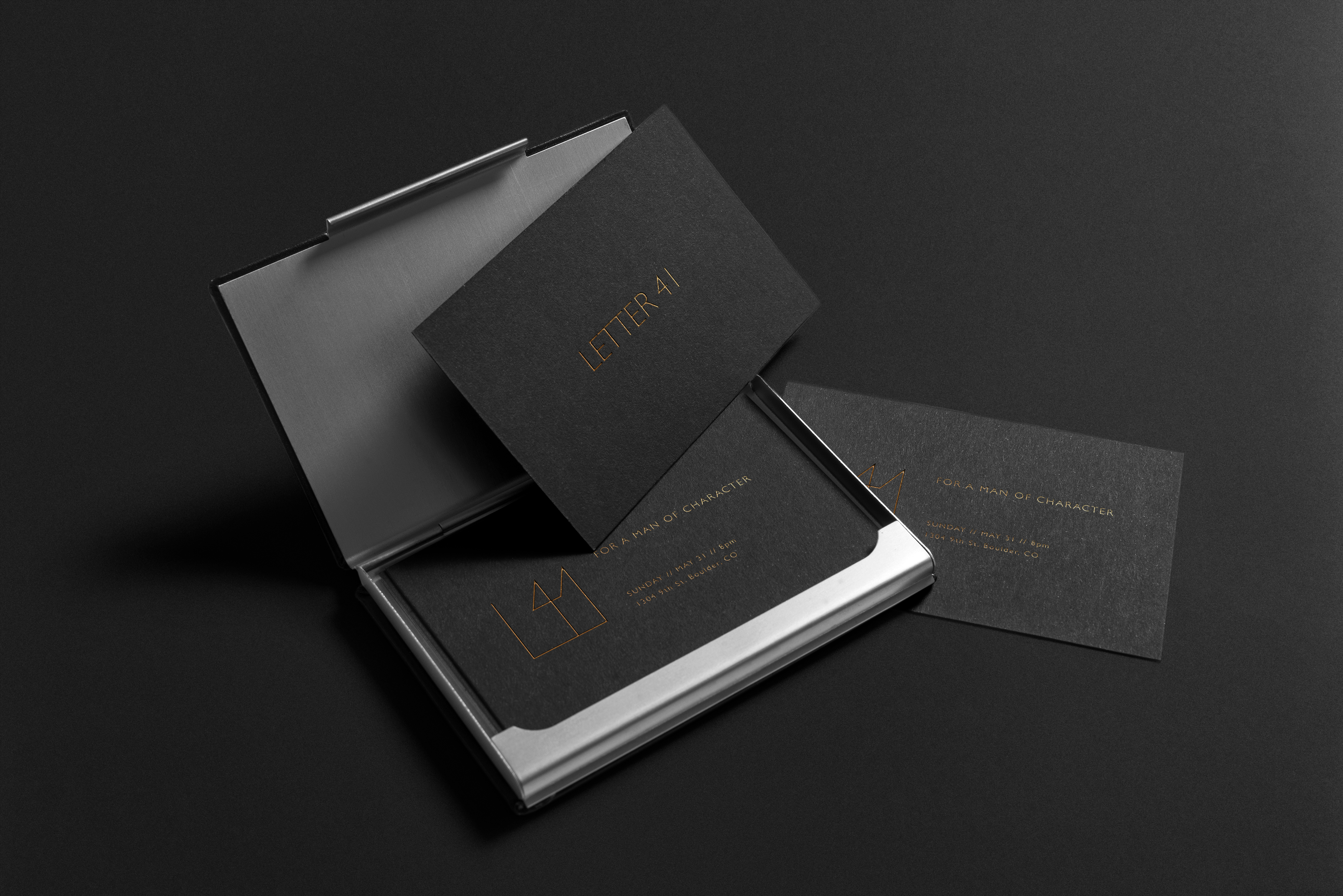 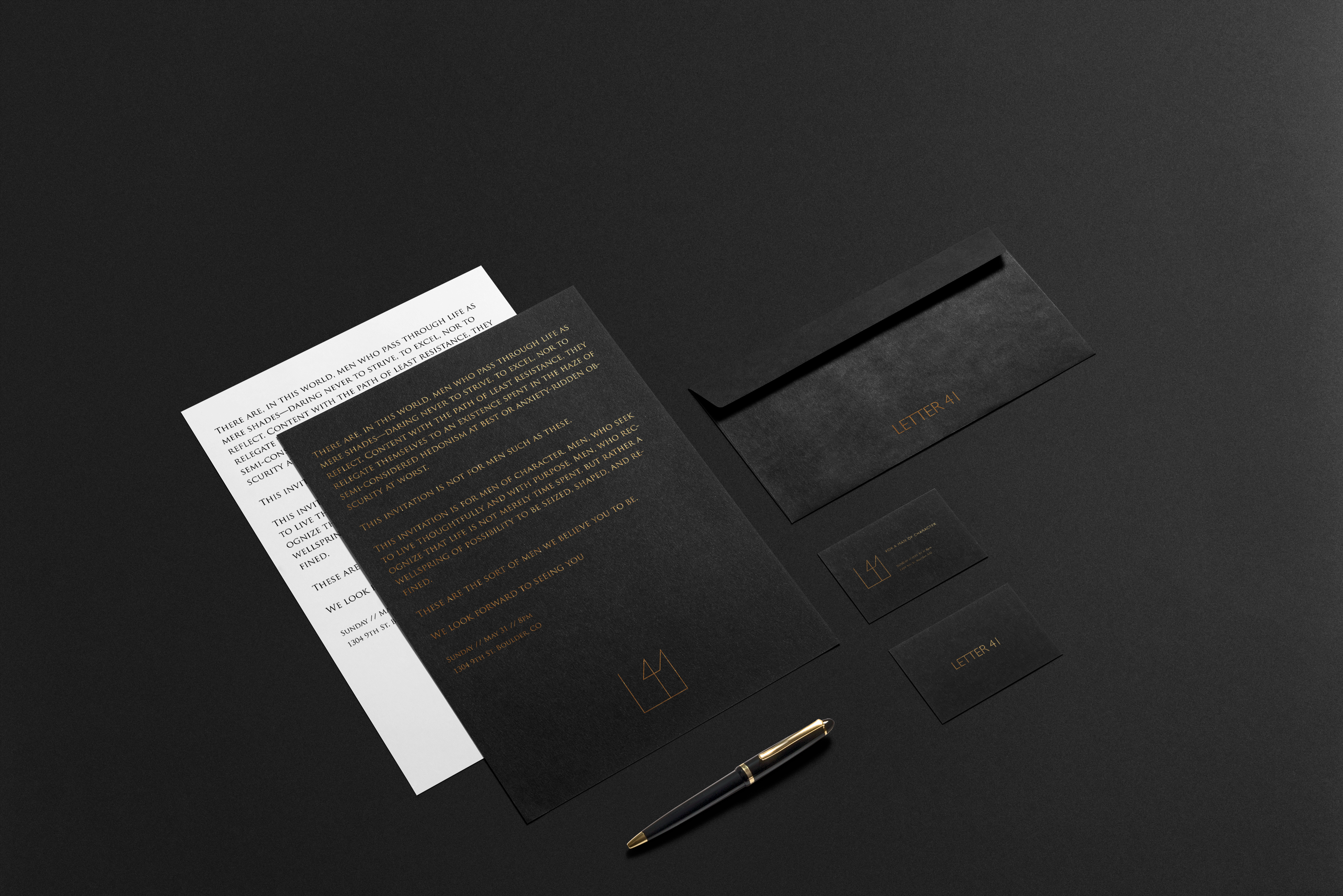 We decided to concept the continuation of Letter41 based on the success of the dinner. What would the lifestyle brand look like in a digital format? How would it present itself beyond the small group of friends?

It was a brand about adventure, curation, style. It was the idea of life well lived being one who cares about details in all things. Everything matters. From the way one dresses to the way they make coffee. We thought about the idea of a digital editorial. Writing stories. Curating beautiful products found around the world. Thinking of ideas and doing photo essays of time spent.

Based on that I created the idea of a digital magazine. The navigation being the cover. Containing the editor's letter about the theme for the current issue. A small quote to ponder on. From there leading to the cover page of the articles in that issue along with the cover photo.

Both of these linked pages were based on the golden ratio. The columns created off of the Golden Rectangle and spacing created from the shape of the page. Using the diagonals of both the full page and rectangle. 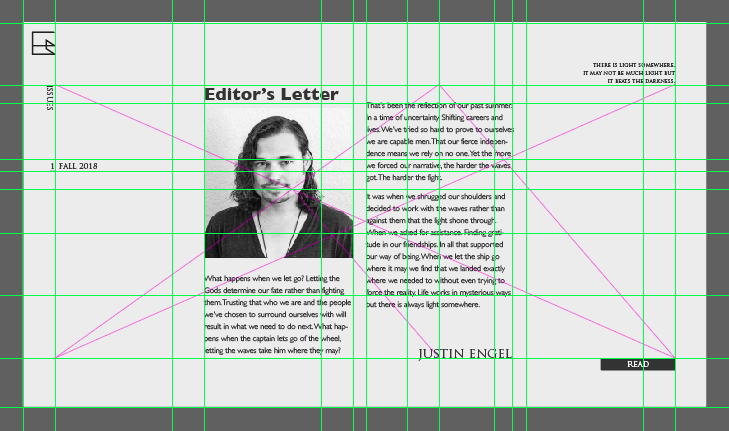 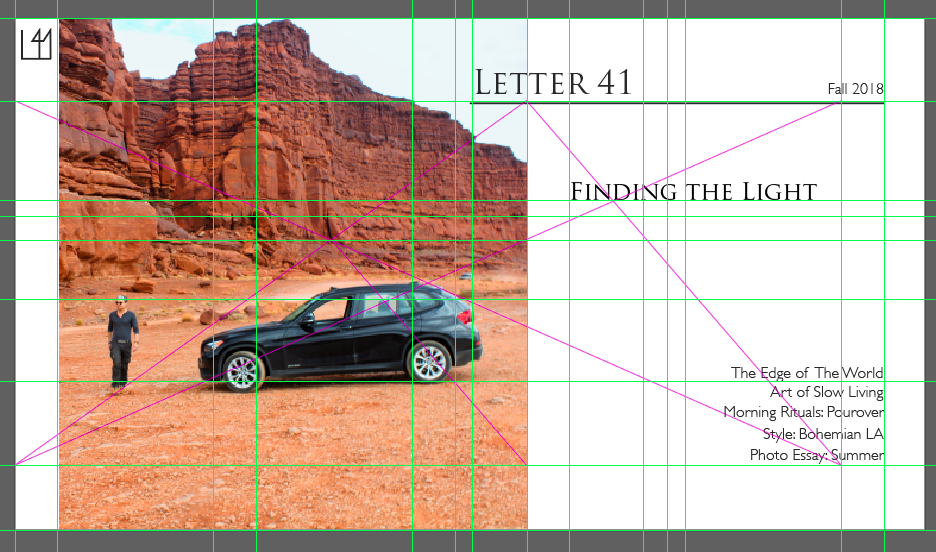 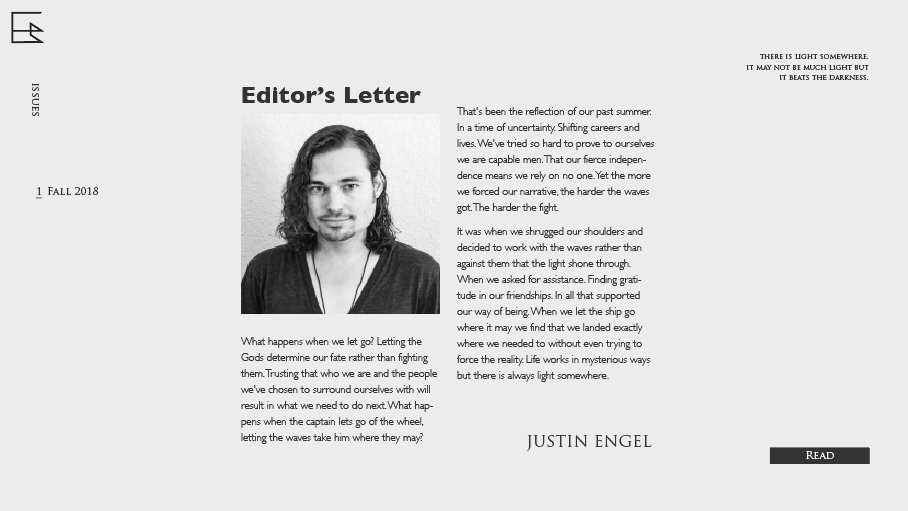 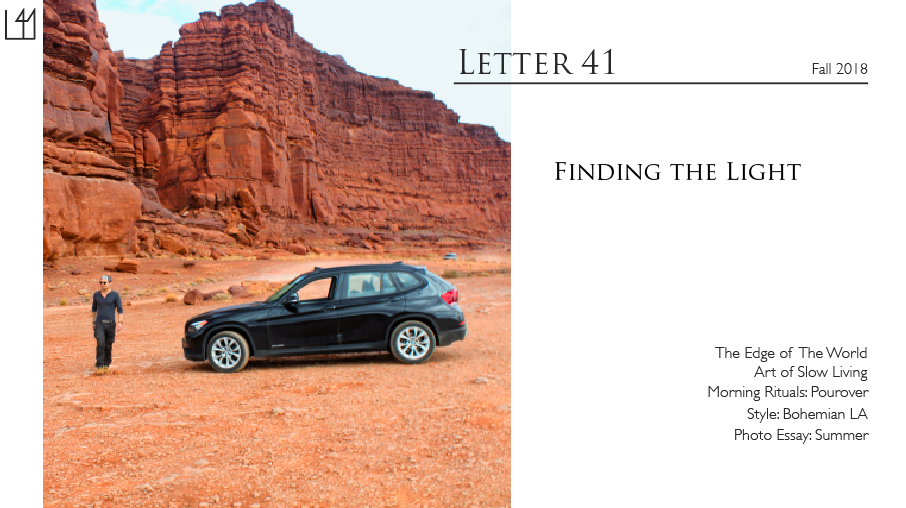 My thought from there was as you went through the articles the editorial would get narrower. Focusing you in on each article. So I built a root 2 rectangle composition inside the golden ratio. Trying to guide the user to narrow in and focus on each article. Get put into the stories of Letter41. 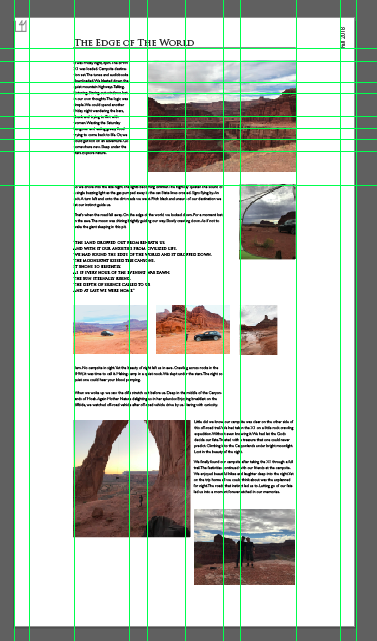 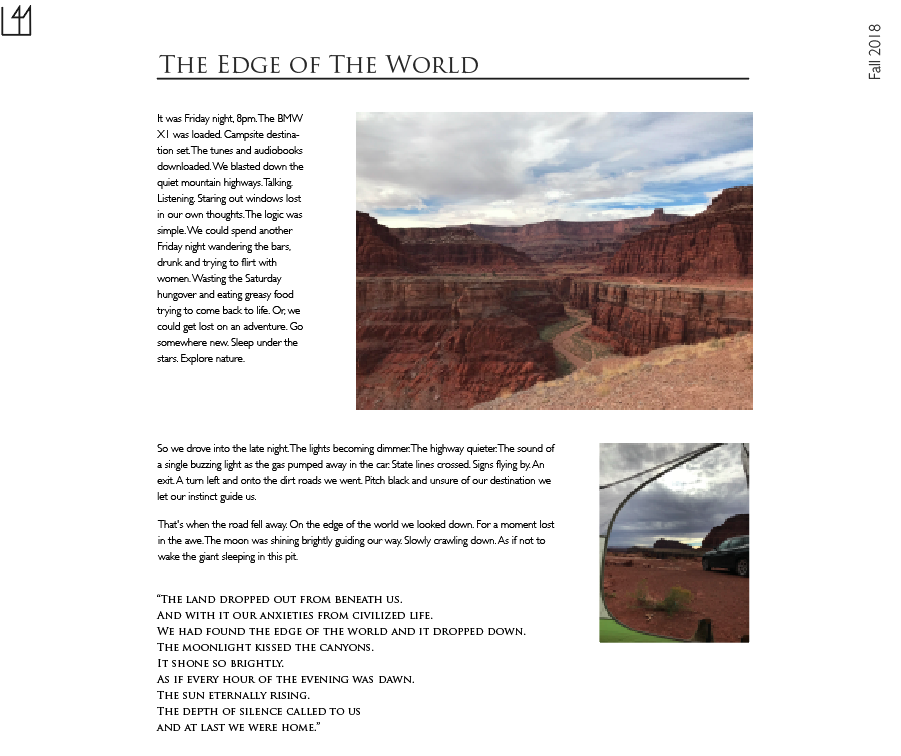 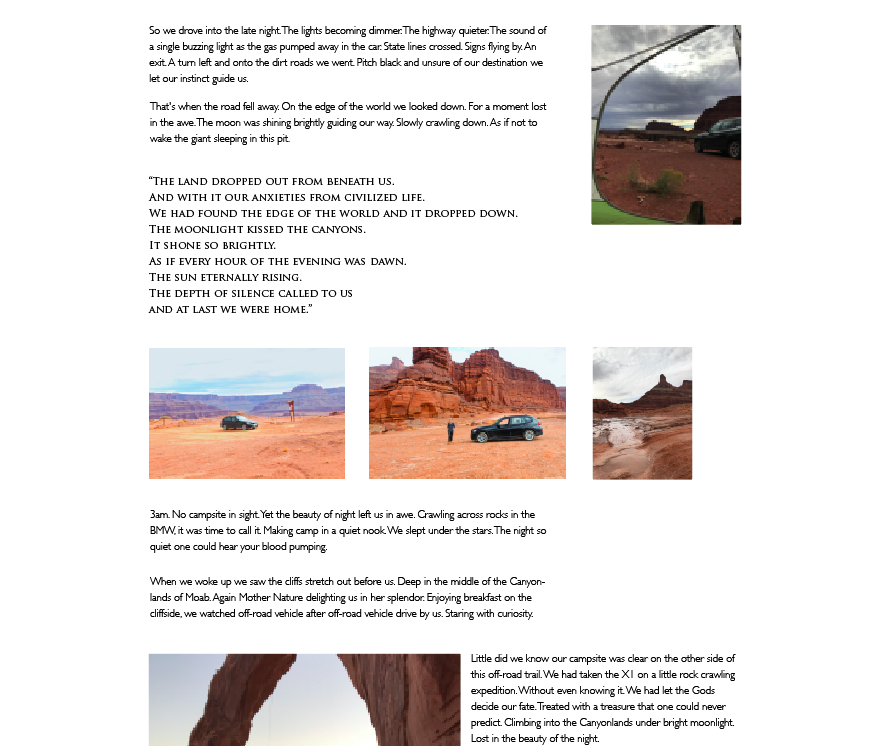 The dinner was incredibly successful. Everyone invited said they had an incredible getting lost in conversation. Thinking about new perspective. Coming away with new ideas. More importantly having bigger questions they asked themselves on the drive home. Everyone wanting to be invited again.

I was told the invitation left them intrigued. It was so different than anything else they received. They had a sense of mystery and depth. With that minimal design it left one curious. Wanting to discover more about why they were invited.

Letter41 is currently still debating about going digital and expanding the ideas of a website, newsletter and full on brand. For now it continues to host small dinners. As with their way of being they are taking their time in exploring the idea of this brand. I look forward to continue working in the exploration of this idea.